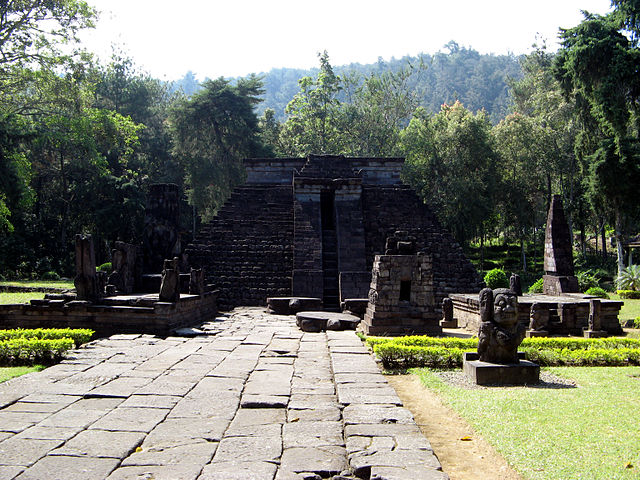 Candi Sukuh was built partway up Mt. Lawu, just a few km east of Solo along the dividing line between central and east Java, during the Majapahit period in the first half of the 15th century. Its most outstanding feature, the pyramidal platform seen here (west face), looks like nothing so much as an Aztec temple-mountain that has somehow been dropped, impossibly, in the middle of Indonesia; it once supported a giant stone phallus, with four balls at the base, that is now kept in the national museum in Jakarta.

The strange appearance of the site is partly due to the fact that so much of it has been carried away over the years; it now resembles a jigsaw puzzle, with many pieces missing. Moreover, although undoubtedly a place of Shiva worship, it looks nothing like the earlier, classical, Hindu temples elsewhere on Java and Bali; here the worship of Shiva mingles with Bima cult, tantrism, animism, fertility- and nature-worship, and other things even harder to classify. The explanation seems to be, that as Islam forced Hinduism to retreat eastwards across Java, the Hindu's loosening grip both permitted an enlargement of nativist expression, and encouraged a syncretism with indigenous beliefs. The phallic element, which has always been a part of Shiva cult, lent itself well to such a process.